The role of government in assisting eligible voters to register has changed over time and varies significantly by state. In general, the onus falls on the individual to seek out a voter registration form, complete it and return it to the local election administration agency. In 1993, Congress passed the National Voter Registration Act (NVRA), commonly called “motor voter.” The Act requires states to provide individuals with the opportunity to “opt in” and register when applying for or renewing a driver’s license or seeking public assistance. At the state level, legislatures have passed a variety of measures to ease the burden of voter registration, including through online voter registration (38 states), same-day registration (eight states) and pre-registration for 16- and 17-year-olds (16 states).

What is the most appropriate role for the government in registering those eligible to vote? A recent reform campaign in Alaska shows how a state government can build upon existing infrastructure to add more voters to the rolls.

By mid-2018, 13 states – including Alaska, Oregon and Washington – and the District of Columbia had instituted automatic voter registration (AVR). This reform is similar to the NVRA in that it links the driver’s license application or renewal process to voter registration.  However, the system assumes an intent to register and offers individuals an opportunity to “opt out.”

The experience in Alaska was different from the others on several levels. First, while legislators enacted AVR elsewhere, in Alaska, it was the voters that passed a citizen initiative in November 2016. Further, the registration process is not built off the process of obtaining driver’s licenses, but rather on the state's Permanent Fund Dividend, which distributes oil revenues to residents. When residents apply for their annual dividends from the Permanent Fund, their information is automatically transmitted to their local election office. This method ensures that the voter rolls are updated annually with the most accurate information.

Advocates chose this route for AVR because more Alaskans apply for the Permanent Fund than a driver's license, particularly in rural communities and among the Native population.  People of color and tribal communities in Alaska have traditionally had problems with access to the polls, being largely underrepresented in voter rolls. In previous election cycles, Alaska Natives accounted for 15 percent of the state’s population, but only comprised seven percent of registered voters.

There was no formal organized opposition to the AVR ballot initiative in Alaska. Members of both parties, as well as influential businesses, including BP, were supportive. The main criticisms were of the cost of AVR, estimated by the state to be nearly $1 million in the first year, with additional annual costs of approximately $300,000.

Within a year after Oregon initiated the first AVR policy in 2015, voter registration increased by more than 10 percent, or 250,000 residents. Further, a Demos study found that people of color and younger people disproportionately registered through AVR and that the reform led to a two- to three-percent increase in voter turnout overall. An analysis of total registered voters in Alaska shows a modest increase over a similar timespan in 2015, with a significant spike (7,272 additional voters) in January 2018.

The Role of Philanthropy

Funders can support voter registration through various means, including nonpartisan education and outreach as well as funding the non-lobbying portion of ballot measure campaigns. In Alaska, the AVR campaign included contributions from the Cook Inlet Region, Inc. and the Bristol Bay Native Corporation.

Philanthropy has played an important role in helping people register to vote. In the 1980s, a small group of foundation leaders formed the Ad Hoc Funders’ Committee for Voter Registration and Education, which later became the Funders’ Committee for Civic Participation, a membership organization of philanthropies that focuses on democratic reforms. Many funders supported voter registration drives led by groups like ACORN (Association of Community Organizations for Reform Now) and essentially compensated organizations based on volume of completed forms. More recently, foundations have shifted to supporting policy reforms on voter registration to emphasize the responsibility of state and local government to register new voters. Foundations such as the Bauman Foundation, an organization that awards $6 million in grants per year toward advancing democracy and social change, have funded the Center for Secure and Modern Elections. This entity provides advocacy support to local and state election reform efforts.

Actions by foundations in registering voters in years past, seen as having the intent to remove specific elected officials, ultimately led Congress to institute strict guidelines on how foundations could be involved in the registration process. These include limitations on how a foundation spends on programming, where it receives support and measures to ensure that a foundation’s voter registration efforts are nonpartisan and widespread – not based on a single local election. Despite the restrictions, there are ways in which foundations may support voter registration efforts, such as by launching nonpartisan voter education outreach or giving grants to charities involved in ballot measure campaigns.

*All grants are at least $5,000 from foundations making at least $15,000 in aggregate contributions. 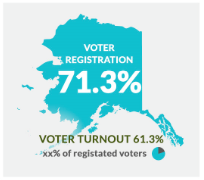