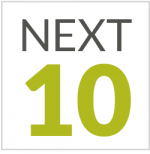 In this first installment of Next10, our conversation series about Northwest philanthropy trends to watch in the next decade, we spoke with David Harrison of Boomerang Giving, calling in from Washington's Bainbridge Island, and Chris Sutton of Smalldog Net Solutions, calling in from Washington's Orcas Island, about the rise of mobile giving technology and the implications for older donors, local nonprofits and community foundations.

Nicole Neroulias Gupte, Philanthropy Northwest communications manager: You're both working on technology that makes it easier for community foundations and nonprofits to raise money from individual donors. Tell us about it.

David Harrison, Boomerang Giving chair: We’re interested in using the digital world to effortlessly help people become philanthropists. Chris, can you picture those 20 organizations up on the wall at the Eastsound grocery store [on Orcas Island]? We thought of the idea of Boomerang Giving when we saw how the grocery store was allowing people to round up to specific organizations. The usual roundup is for Habitat for Humanity or the American Cancer Society, but at that store, you could send it to the animal shelter. We said, wouldn’t it be cool if you could do the same thing with senior discounts? More than 3 million Baby Boomers are turning 65 each year. And then we thought we wouldn’t want to do it for five big national organizations that have a lot of cash; we would want to "boomerang" discounts to a local nonprofit of your choice. It's the same mission as community foundations: have philanthropy be very community-based and community-rich. If we can use new technologies to advance that, it’s a good thing.

Chris Sutton, Smalldog Net Solutions CEO: We're expanding our Smalldog integrated accounting system, specifically to report on grant cycles, our community giving process. Smalldog allows community foundations to spend more time with donors and grantees in the communities and less time reconciling accounts, doing computer grunt work. We're allowing the computer to do what it’s good at, and you to do what you’re good at, like talking to people! The donors have more access to give directly and they're able to give to things online, which they expect now. Not just the general outside public, it's donor-advised fund (DAF) holders — they have direct access to view their accounts live and they can submit grant requests live to give away their money easily.

Nicole: We've seen a lot of disruption and innovation, both in philanthropy and technology, coming out of the Northwest. What's special about our region?

David: There’s lots of richness in the Northwest giving environment. You could make a long list of inventive ideas that have come out of the Northwest. Social Venture Partners started here, and Seattle Foundation’s experience with GiveBIG is a dramatic example of single-day giving. There’s a lot to say about giving ideas generated in the Northwest.

Chris: I think anybody in the world can make a difference. Looking at specific areas as incubators — the Bay Area and the Northwest — I think it’s somewhat true, but the Internet is also enabling people everywhere to help out. We have Microsoft and other companies here, but where we’re really lucky is to be in a place that enables us to be able to do this. We don’t have to worry about power and water and the Internet. And we're in a place where technology is assumed now. It’s somewhat like email — you assume everyone has email.

David: Another way to think about this issue is where inventiveness happens, ideas can be had anywhere and are being had anywhere. But nonprofits and philanthropists in the Northwest are great markets and ideas get hatched. Philanthropy Northwest and our community foundations, if you saw them at national meetings, you could establish that there’s an openness that's healthy.

Nicole: Online giving has been around for years, but we're really seeing it take hold now with a majority of seniors — age 65 and older — and with the concept of pooling together a lot of small donations. How does this impact how foundations and nonprofits do their work?

David: There are things that Chris and me are doing that are distinct and totally separate, but I think the common theme is that as those transactions become more effortless, it makes giving easier. You have these complex, difficult-to-use accounting systems that he’s replacing. The easier you make it, the more the community foundation is able to democratize philanthropy. You’re more able to have expanded donors, which certainly happened when he started with Orcas [Island Community Foundation], but beyond that, you have an expanded capacity to serve a larger number of donors better.

Chris: Crowdfunding is one of the big success stories of Smalldog. I came into this to solve some accounting problems, but once we solved those and we had a system online, we suddenly realized that we can very easily spin up a page that the public can see and give to. The first year Orcas did it, they raised $124,000; the second year was $133,000; and then last year was $183,000. Each time, they’ve increased the number of donors: 57 the first year, 60, and then last year was 117 donors. And in both of those, well more than 50% of the donors were new donors to the community foundations. It’s engaging people that they didn’t engage before. The donations are as little as $10, but it’s extremely easy — here's my credit card number, click-click, I want it to go to this grant — and it's done. On Wenatchee’s side, the Community Foundation of North Central Washington had 430 donors give $151,000 and over 100 of them were new to the organization. They had no expectations on this, and it kind of completely blew them out of the water as to what the community supported.

Nicole: In addition to engaging new donors, are the community foundations finding that these giving campaigns attract older or younger participants?

Chris: I don’t know that they’ve been able to dig into [donor demographics], but the results were pretty incredible.

Nicole: So will we be seeing more crowdfunding campaigns and microgiving options, similar to what we've seen from our region with Seattle Foundation's GiveBIG and AmazonSmile, engaging new donors?

Chris: Orcas will have another giving day grant cycle in the spring. It’s been easy enough to do and successful enough that they’re now doing two giving cycles a year, spring and winter.

David: We have our toe in the water to get involved with giving campaigns. Over time, the major digital transactions will make it a tool for nonprofit support. It’s fun, easy, low-cost way to help resource nonprofits and democratize philanthropy so it’s not just millionaires thinking about how to give back.

Chris: Have you launched completely with Boomerang?

David: We launch on February 1. I’ll send you the demo.

David: The retailer is not involved. When you've saved the $5, you go on your app and log it. When you get to $20 [or a different amount you choose], you can opt to direct it to a nonprofit. We did an experiment on Bainbridge with the movie theater and we got 211 discounts in a month and they sent it to the Bainbridge Community Foundation. It was harder than I thought it was going to be, but it has promise over time. The biggest single problem is having to deal with multiple retailers and they do not want complexity in their line.

Chris: Getting everyone’s accounting systems to talk to each other would be the hard part. If a business had an easy way to integrate your system, then it’s not that big a deal.

Nicole: Would the ideal be something like the AmazonSmile model, where customers can direct their donation, but the retailer handles the transactions?

Chris: And then the company would get the tax benefits...

David: Right now, we’re on more comfortable ground. My lesson from the AmazonSmile model is that those margins are so tiny... it’s certainly generous of them to make that half percent available, but it’s really hard to make it add up. With the 0.5% payment, you could do $1 million of traffic that your nonprofit induced and it would only generate $5,000. The beauty of senior discounts is that the margins are 30%, so it’s easier to get to a significant amount. And every year, there are a lot of new seniors who don’t want to be offered that movie discount — "damn, I don't want to be old enough to be offered a discount!" — but this gives them a way to put this discount to work. And the age group that's the biggest expansion of smartphones now is 65 to 75.

Nicole: That makes sense. My parents still prefer flip phones, but they do use tablets... Where do you see the mobile giving trend going in the next 10 years?

Chris: The barriers to entry start to drop significantly and you see people giving more directly in their community. It’s happening way faster than 10 years; I see it happening in two years. As the older generation is becoming more tech-savvy and donating more online, and the younger generation is getting older and they now have the money to be philanthropic, they’re almost demanding the online access to their funds — not just to give, but to interact with them. That’s forcing community foundations to bring their systems forward.

David: While payment technology changes all these things over time, there's a need for the community foundation, and in some cases private foundations, to be guiding intermediaries. I think six years from now, discounts will be redirected to nonprofits all across America. Right now, digital payment by phone is still a small percentage of the market, but you could have these discounts programmed into that process — just the way Stripe now sends you an email and asks for the tip, there will be a way to redirect to a charity. Over time, there will be lots of ways to help seniors who are stuffing that $3 back into their pocket instead redirect it to nonprofit support. This is the first year of a changing universe of how charitable contributions will be made.

Chris: People are trusting the community foundation to vet nonprofits. With technology, it's so easy to have the whole world in your pocket; how do you know what to look at and where to give? You do need to step out a little bit and not be on your phone all the time.

This interview has been edited and condensed.