Charitable giving in the United States grew more than 7 percent to $358.4 billion in 2014, including a 5.7 percent jump in individual giving and a 13.7 percent increase in corporate giving, according to the Giving USA 2015 report: 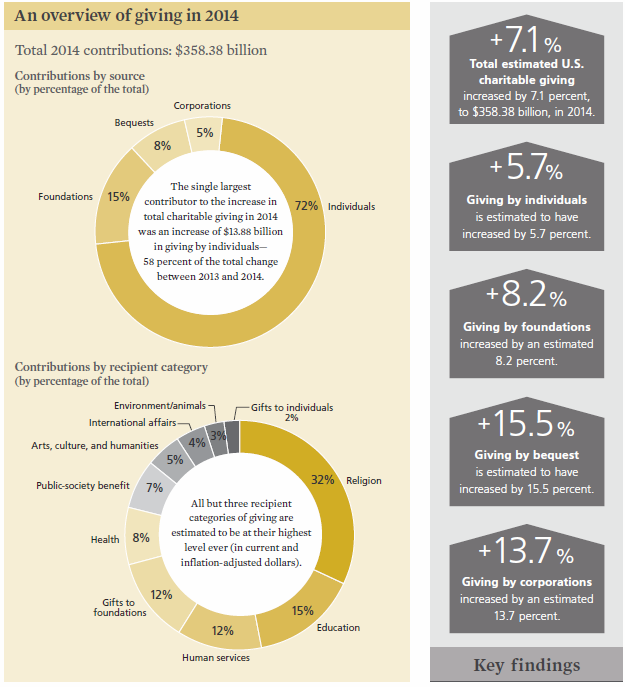 This 13.7 percent increase (11.9 percent inflation-adjusted) amounts to $17.8 billion in cash and in-kind contributions made through corporate giving programs and grants from corporate foundations. Key points:

"While the total giving amount from the corporations is a relatively small piece of the overall giving pie, corporate giving can still help to influence overall giving by drawing attention to organizations and programs that have the highest impact," said Aggie Sweeney, Giving USA Foundation vice chair. 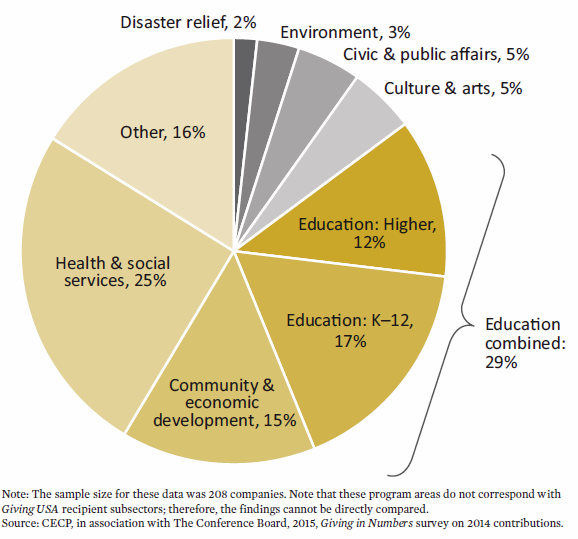 Citing a separate survey of 271 large U.S. companies by the CEO Force for Good (CECP), The Wall Street Journal reports the median corporate giving amount was $18.5 million last year: 0.1 percent of revenue. "Much of the giving by financial services firms was cash, while communications and health care companies did more non-cash giving, such as offering products and pro bono services." Of the cash contributions, 12 percent were corporate matches of employee gifts.

These national findings align with Philanthropy Northwest's Trends in Northwest Giving projections, and the data in Microsoft's most recent Corporate Citizenship report:

Sweeney, who is based in Seattle, noted, "I continue to be impressed by the quality and thoughtful grantmaking done by many of the leading corporations in our region."

In addition to major corporate philanthropists like Boeing, Microsoft and Starbucks, the Pacific Northwest's philanthropy is ahead of the curve on many Giving USA indicators, she added, due to the Bill & Melinda Gates Foundation and our thriving network of community foundations and social enterpreneurs

"We are excited that last year's giving reached an all-time giving high in our country, and we know that many of the largest gifts, and of course the largest foundation in the world is headquartered in our area," Sweeney said. "There's a strong indication of a commitment to philanthropy and an investment of resources available."

An earlier version of this post appeared in Philanthropy Northwest's Summer 2015 corporate e-bulletin.

Did your company increase its charitable giving last year? Are you supporting new programs this year? Email Nicole Neroulias Gupte to share your story with the Philanthropy Northwest learning network.