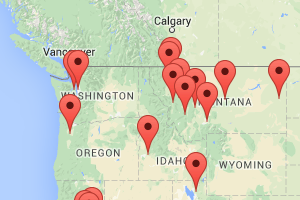 In 2011, The Seattle Foundation successfully gambled on a fundraising experiment: a 24-hour online giving campaign for a wide range of nonprofits in the region. (The Minnesota Community Foundation and Pittsburgh Community Foundation launched the first giving day campaigns in 2009; Seattle's GiveBIG was the first in the Pacific Northwest and remains among the most successful in the country, The Chronicle of Philanthropy reports.)

GiveBIG has raised $40 million for nonprofits in Washington in its first four years; The Seattle Foundation is gearing up for its fifth annual campaign on May 5, with more than 1,700 participating organizations. The experiment has gone viral, inspiring dozens of other giving days across our region (see map) and nationwide this week, as their own branded events or through the Give Local America program. Organized by community foundations and nonprofit associations, each uses a combination of fun themes, stretch funds and hourly prizes as incentives to attract new donors and keep them giving throughout the day to a variety of causes.

“There’s no doubt that these giving days are successful in raising money and almost all the giving days we’ve evaluated have increased their amount raised year over year,” said Anna Dilernia of the Knight Foundation, which has produced a Giving Day Playbook. “While this news is terrific, we are concerned with these events being sustainable and in line with the community foundations long term goals especially considering the cost and time that is required to host them. We’re addressing the issue of sustainability by encouraging practices that are cost-effective and provide the community foundation long-term benefits beyond a day of giving.”

Giving days do tend to bring in more first-time donors, she added, resulting in "new" money for nonprofits. But it's up to the nonprofits to determine how much of their time and treasure is worth spending to stand out in these crowded fields, how to balance the giving day efforts with their own fundraising programs — and whether this is a bubble that will eventually burst.

Until then, Idaho Nonprofit Center is excited to keep the momentum going, and is on track to have its most successful giving day yet. Its Idaho Gives campaign is already separated from the pack by taking place May 7 instead of May 5, which Executive Director Janice Fulkerson explained was intended to keep its third annual campaign consistently scheduled on the first Thursday in May. Nearly 600 Idaho nonprofits are participating this year, with more than $55,000 to add to the donation pool, including $500 donor appreciation prizes and $1,000 "golden tickets" awarded throughout the day to randomly selected nonprofits.

“It’s a great way to bring our nonprofits and supporters together and generate a lot of excitement and collaboration across the private, public and nonprofit sectors,” Fulkerson said.

Giving Day Campaigns in Philanthropy Northwest's Region on May 5