Getting to the Acupuncture Point of Change in Conversations

A board retreat. We had just spent 45 minutes parsing the difference between goals and objectives, and it felt like things were heading south. Participants didn’t want to do either the exercise or break into groups, they just seemed to want to argue about planning in general — not unsurprising, since the board had a broad representation of youth, business, government and nonprofits. Then my co-facilitator stood up and offered five minutes of theory on the four types of conversation and how they can either evolve or stay stuck.

At the end of this description, a board member raised his hand and initiated the crucial move to inquiry, asking why we were doing the six goals before us now anyway.

“Because the national organization makes us submit a revised set of goals every three years to maintain our charter," was the reply.

Within minutes the conversational logjam had broken and people had moved on to talking about what they found most interesting/challenging in the proposed goal revisions. One particular phrase, “social justice,” provoked such a range of response that we changed the agenda to allow for a deeper dive discussion about it on the second day of the retreat.

In the Four Levels of Conversation framework, 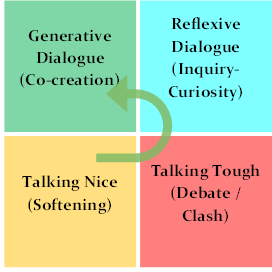 Otto Scharmer and Adam Kahane build upon the idea from evolutionary biologist Humberto Maturana that conversations create the world. They outline a progression among four types of conversation:

A key challenge is moving a conversation from Level 2 to Level 3. Often when we are in the midst of the argument and disruption characteristic of Level 2 we long to return to the normalcy and politeness of Level 1. Instead, we would often be better served by remembering that innovation and new clarity comes from the inquiry and curiosity that characterize Level 3 conversations — “that’s so interesting, tell me more” rather than “you’re wrong and here’s why.”

Groups that reach Level 3 in a conversation — shared curiosity and inquiry — are often able to achieve new synthesis and insight. Innovation often shows up when we work in new ways to join the disparate elements inherent in polarities. This is the generative dialogue, co-creation from co-sensing, that groups most relish. This last type, which we can also think of as collective creativity, is where we speak from what is moving through us.

Level 4 conversation is “the rarest and most precious type, offer[ing] a major acupuncture point for future change… by being multilateral and cyclical, high on inclusion and transparency, and organized by an intention to serve the well-being of all.” 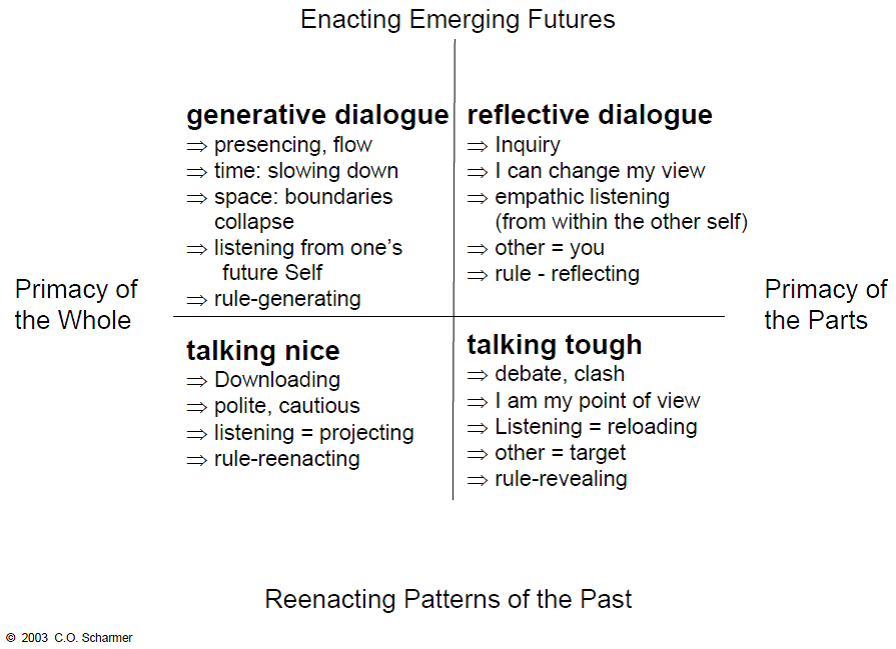 Having a shared understanding of how conversations can evolve helps us all lead from the side, recognizing where a curious question can more a group forward. As a facilitator, I have had to learn the patience to sit through Level 2’s "talking tough," as it is part of the conversational dance that adds enough disruption and discomfort to get us to the shared discovery and sense-making of Levels 3 and 4.

At The Giving Practice, we believe in beginning any planning process with a series of conversations. Groups are often resistant to the shared downloading and dialogue that can help reveal differing mental models and assumptions at Level 2. Trusting that these disagreements can be spoken openly, that in fact they are essential to meaningful change and innovation, is bolstered as participants develop the muscles and practices needed to engage in the flow of the Four Levels of Conversation. Inquiry and shared sense-making are the reward for speaking competing truths respectfully and in service of a new syntheses or paradigm. This new alignment that lies beyond initial disagreement is the reward for courageous conversation, and often distinguishes great organizations by providing that most needed governance fuel: generative conversation.