It usually takes at least a week to report final numbers from Seattle Foundation's GiveBIG campaign and other 24-hour giving days across our region, as organizers confirm payments, matching funds, credit card fees and other complex calculations. This year has taken much longer, due to the national website crash that caused major delays and some duplicate donations, prompting some campaigns to extend their hours and include donations made directly to participating nonprofits into their pools of "stretch" dollars.

Despite the crash, our region's May 2016 giving days raised about $25.4 million for nonprofits in Idaho, Montana and Washington — a $6 million increase from last year.

Seattle Foundation exceeded its $20 million goal for 2016, raising $22 million on May 3 and 4 — a 30% increase from the $16 million raised in 2015. The results come from more than 89,000 donations and over $4 million in stretch and matching funds, including sponsorships from Philanthropy Northwest members The Boeing Company, Tom and Sonya Campion, Medina Foundation, Microsoft Alumni Network, Starbucks and Wells Fargo.

“The community did it. The 1,600 amazing nonprofits and the nearly 50,000 donors have rallied together, overcame challenges and persevered,” said Tony Mestres, Seattle Foundation president and CEO. “The generous spirit of our community prevailed and a large number of our nonprofit partners were able to achieve their fundraising goals, but certainly not all.” 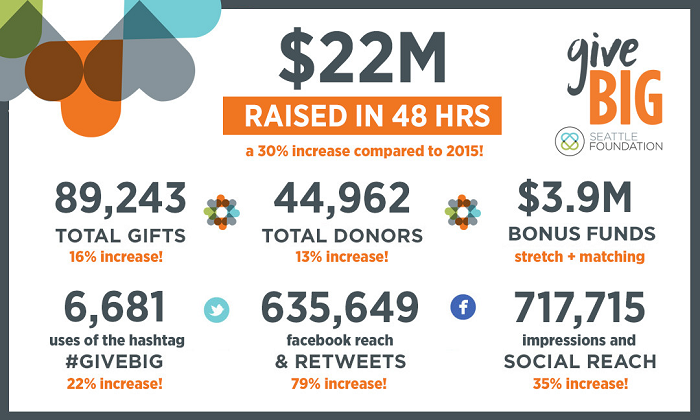 Kimbia, the online fundraising platform that crashed on May 3, crippling the 24-hour Give Local America extravaganza for thousands of nonprofits participating in Seattle Foundation's GiveBIG, Montana Community Foundation's MTGives and dozens of affiliated campaigns nationwide, has issued "a multi-phase plan" to make things right. In the May 9 announcement,the company pledged to waive $370,000 in fees from the day and distribute three months of its CEO's salary out to the organizations that participated in Give Local America.

The John S. and James L. Knight Foundation's Giving Day Playbook has a section on crisis management, including a case study from Minnesota's 5-hour GiveMN website crash in 2013. The foundation will be talking with community foundations this year to share the next round of learnings from the Kimbia crash, said Lilly Weinberg, director for community foundations.

“You'll need to talk to Kimbia about the specifics, but these communities have clearly demonstrated their eagerness to support their local nonprofits through giving days, and the amounts that they're willing to contribute are substantial," she said. "With such proven demand, technology service providers should have every interest to improve their systems to connect communities and nonprofits on one of the biggest donation days of the year."

In light of this challenging experience, Philanthropy Northwest members may be considering different approaches for online fundraising campaigns. We look forward to discussing this in greater detail at our annual conference and other gatherings of community foundations and state nonprofit associations this year. 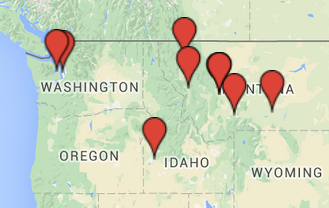