A Nation of Immigrants and First Peoples

A Nation of Immigrants and First Peoples 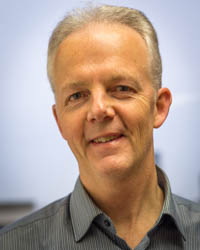 The idea that we are a nation of immigrants lies at the center of our national narrative. That narrative celebrates how diversity has uniquely shaped the grand experiment known as the United States. What is often lost in today’s ongoing debate over immigrants who are in the country illegally is the fact that, each year, our country welcomes approximately 680,000 naturalized citizens to its communities. While there are many enduring reasons why these new Americans pursue citizenship and barriers often stand in their way, they all seek their chance to experience a better life in the form of their American dream. In short, U.S. citizenship is a crucial step toward improving the social, civic and economic well-being of new Americans and their children.

On July 4, my wife Kris and I attended the annual Independence Day naturalization ceremony at the Seattle Center. It was, in every way, incredibly powerful and uplifting! Along with many others, we watched Governor Jay Inslee, Senator Maria Cantwell, Representative Jim McDermott and Mayor Ed Murray welcome 507 new citizens from 85 different countries. The ceremony recognized each of these countries, often accompanied by enthusiastic cheering from the crowd.

The ceremony also highlighted another important part of our national narrative that typically doesn’t receive the same attention as the story of immigrants. However, here in the Pacific Northwest, it is a story we know well: the story of our first peoples, both Alaska Native and American Indian. Native American performers Gene Tagaban, Peter Ali and Swil Kanim shared a story of inclusion and generosity, recounting the tale of how Raven brought fire to the people. Gene (seen below), a noted storyteller, is of the Takdeintaan clan, the Raven, Freshwater Sockeye clan from Hoonah, Alaska. He is the Child of the Wooshkeetaan clan, the Eagle, Shark clan from Juneau, Alaska. He is Cherokee, Tlingit and Filipino. 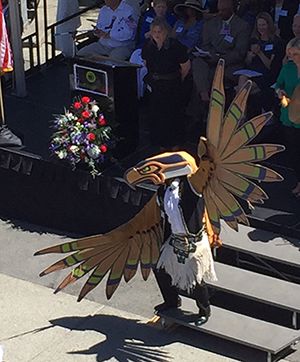 Of course, the centerpiece of the ceremony was the administering of the oath. With 507 prospective U.S. citizens standing with right hands raised, 9th U.S. Circuit Court Judge Richard C. Tallman administered the oath and then officially welcomed our new fellow citizens. At that moment, no one seemed to care that they had been sitting in the 90 degree temperature for several hours.

By the way, have you ever worked your way through the civics test that is part of the naturalization process? In the interview, the U.S. Citizenship and Immigration Service officer will ask the applicant up to 10 of 100 civics questions. An applicant must answer six out of 10 questions correctly to pass. It’s harder than you might think, and a good reminder that the road to citizenship is not an easy one.

Thank you for sharing your experience with me. I was inspired and learned a few things, too.