Partnership in Action: Philanthropy Responds to the SR530 Mudslide

One year ago, on March 22, 2014, a devastating landslide hit near the town of Oso, Washington. An unstable hill collapsed, sending a torrent of mud and debris across the Stillaguamish River, causing flooding upstream, blocking State Route 530, burying an entire community, and killing 43 people.

It was, and remains, the most deadly landslide in modern American history.

Immediately following the mudslide, dozens of local, regional and federal agencies started working together to help the people and communities impacted by the disaster. As with all disasters, there are many dimensions to the story: human, environmental, geological and political. One bright spot in the story of the SR530 landslide was how public and private agencies and the people who led them coordinated many moving parts to provide quick, flexible and effective responses to serve the people of Oso and neighboring towns and tribal reservations.

On this somber anniversary, Philanthropy Northwest and the Bill & Melinda Gates Foundation would like to share a story of tremendous community resilience. We were honored to observe first-hand the roles of three of the many agencies and community members that worked closely together to meet the needs of people affected by the mudslide.

Local responses to the SR530 slide crisis were coordinated in part by Snohomish County government agencies responsible for behavioral health, community services and housing. As part of a philanthropy-supported regional strategy to end family homelessness, Snohomish County developed new approaches to assessing families in crisis and new links to vital services such as rapid re-housing and supports tailored to the specific needs of each family. For several years prior to the landslide, the county had been working to improve its processes for rapid, coordinated responses to families in crisis.

When the mudslide occurred, the federal authorities, including FEMA, responded by sending teams of professionals whose roles usually include organizing and coordinating local, regional and federal government agencies in order to meet the specific needs of the community. What FEMA discovered was that, because of the infrastructure put in place to assist homeless families, county government quickly demonstrated both the capacity and skills required to respond effectively to the crisis.

As the work unfolded, it proved more effective to have Snohomish County government take on a leading role in responding to the needs of those most affected by the slide (as well as those impacted more indirectly), rather than bringing in external, federal partners who were far less familiar with the specific needs, character and strengths of the local community. 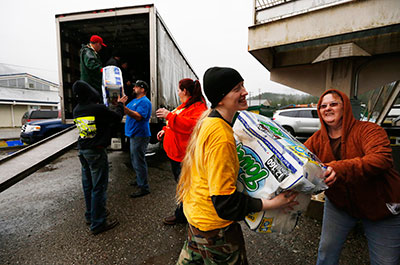 To complement the essential role of government, numerous nonprofit organizations stepped in to offer support. Although it is difficult to tell this story without naming other key collaborators*, two local philanthropies – the United Way of Snohomish County (UWSC) and the Greater Everett Community Foundation (GECF) – played important roles. These two agencies, both partners in the Building Community Philanthropy (BCP) Initiative, credit their participation in BCP with their capacity to work as closely as they did — and continue to do. One of the primary goals of the BCP initiative is to expand the responsiveness and effectiveness of community philanthropy by increasing resident engagement in resource allocation decisions.

Paving the Way for Deeper Collaboration

Although both UWSC and GECF had strong community ties and previous relationships between their organizations, they report that their participation in Building Community Philanthropy offered avenues for creating new, more authentic relationships with community leaders and nonprofits – and an environment where key staff and board from each organization could get to know each other and support each other’s work. Prior to BCP, both organizations report that they had been working in parallel, but not truly collaborating as a team. Over time, with increased familiarity and increased trust, they began to identify overlapping programs and started to look for ways to combine their efforts. This became even more critical when the mudslide occurred.

Immediately following the mudslide, multiple agencies in Snohomish County came together to make a plan. Because the local agencies had already been intentionally improving collaboration between government and nonprofits, there were well-developed networks and coordination channels in place.

“When disaster hits, it is no time to build relationships. The fact that the community foundation had been working more and more with United Way made a huge difference in our ability to come together, get over our own needs, insecurities and turf issues, and get to work,” said Maddy Metzger, President of the Greater Everett Community Foundation. “I’ve heard about the dysfunction in many communities where key organizations are fighting. Not here. Granted, Snohomish County is a collaborative place to begin with, but for our two organizations, BCP made a difference.” 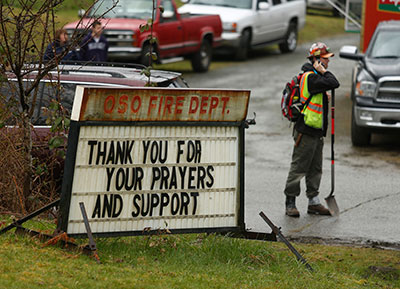 When asked how the Building Community Philanthropy initiative made a difference, the two organizations report:

On day three after the SR530 landslide, the United Way of Snohomish County created a Disaster Recovery fund to support relief efforts for individuals and families. They also picked up the phone and reached out to GECF in order to coordinate their efforts. Together, UWSC and GECF contacted the other local organizations responding to the slide and within a week had regular coordination meetings up and running.

“We were concerned that multiple efforts and funds could confuse the community and those we were trying to help,” said Dennis Smith, CEO of United Way of Snohomish County. “Because of our BCP relationship with the Greater Everett Community Foundation, we knew that they would be an excellent partner in helping bring the various response efforts together.”

The funding coordination worked so well in determining the best procedures for distributing over $9 million in donated funds that one federal employee exclaimed, “I have seen a miracle here!”

Listening and Learning from the Community

In reviewing the recovery effort, many community leaders noted that both GECF and UWSC had spent years before the disaster convening and listening to the community. GECF had started reaching into more rural areas (including Arlington, a neighboring community of Oso) to bring together nonprofit leaders, many of whom were not their grantees, so that they could help build the capacity of local nonprofits. UWSC had also been convening a group of their grantees to offer capacity building, and had been conducting a series of community conversations throughout the county. Staff in both organizations shared that the BCP learning cohort had influenced them to become better listeners, and to ask their constituents what they needed. Both organizations reflected in hindsight that the BCP learning cohort offered models that helped them see what deeper community engagement looks like.

UWSC and GECF both say they learned that effective disaster relief has to include and respond to the people of the community.

UWSC Vice President Barbara Davis, who led the funding coordination group, explained how critical it was to listen. For example, early in the process someone noted that media had been referring to the “Oso mudslide” but that the slide actually affected not just the town of Oso, but the whole SR530 corridor. From then on, the group agreed to call themselves the SR530 Mudslide Recovery Funding Coordination Group, in order to be more inclusive of all the communities impacted. The emphasis became, “we are all in this together.”

Another example of being responsive to the community for both UWSC and GECF was their willingness to rethink their grantmaking practices to be more flexible – and they were able to rely on each other for ideas and support. For example, UWSC traditionally gives money exclusively to nonprofits, but during one of the coordinating committee meetings, the community pleaded to keep the mill in Darrington open. The cost of transportation had skyrocketed because the main road was taken out by the mudslide, and the impact on this small community if employees could not get to work would be profoundly negative. UWSC wanted to be responsive and help keep the mill open, so they changed their mindset and their procedures, and partnered with the Washington State Department of Commerce to distribute $300,000 in gas costs to get the trucks in and out of the mill. 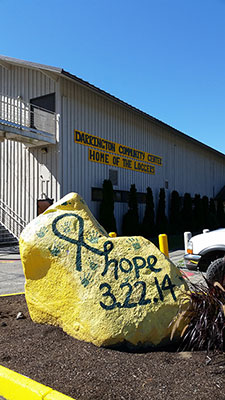 United Ways often focus on short-term investments that yield immediate impact, while community foundations, which typically have many endowed funds, often emphasize the long-term health of a community. Recognizing that each agency has a critical role to play, UWSC and GECF were able to successfully coordinate because they had already been practicing teamwork and had developed trusting relationships – and that teamwork and trust made a difference for the people they serve. UWSC supported immediate recovery efforts, while GECF sent donors to the United Way — thus promoting donor- and community-centered philanthropy — and also took the long view on the important effort of supporting the community over time.

“This could not be about one organization. This was not a time for jockeying for prominence. It was time to look each other in the eye and find the place we could help that matched our strengths. It was a humbling process,” said Karri Matau from GECF.

UWSC and GECF built trust, practiced working together, found their complementary roles and put their skills and capacities into action with the understanding that rebuilding after a disaster is complex and unpredictable, but knowing that they could rely on each other.

“It is impossible to anticipate what items support centers will receive in abundance or be in need of, and the community will be going through stages of grief at its own pace. As time marches on more needs will emerge and it is valuable to have a nimble group of responders to meet the community where they are,” adds Barbara Davis from UWSC.

“I have utmost confidence in our organizations, along with many other key players, to continue to deepen our partnerships and do what is right for the communities where we live.”

The systems, infrastructures, relationships and experiences of working collaboratively meant that multiple agencies and organizations were able to coordinate swift and effective response to the SR530 mudslide – and that made a real difference for the people and communities affected.