The 24-hour giving day trend continues to rise, with a big boost from Seattle and the Pacific Northwest region: Donors gave $19 million to nonprofits in Idaho, Montana and Washington last week, accounting for nearly one-third of the $68 million recorded by the national Give Local America movement, The Chronicle of Philanthropy's Eden Stiffman reports.

The Seattle Foundation led the pack with its fifth annual GiveBIG, the oldest such campaign in our region and one of the largest in the country. GiveBIG 2015 raised $16.3 million for nonprofits in Washington: $14.3 million in online donations, and $2 million in grants and stretch funds from partners and sponsors, including Philanthropy Northwest members BECU, Boeing, Microsoft, Starbucks, The Seattle Times and the Medina Foundation. The results were a 12% increase in funds and 16% in donors compared to last year. 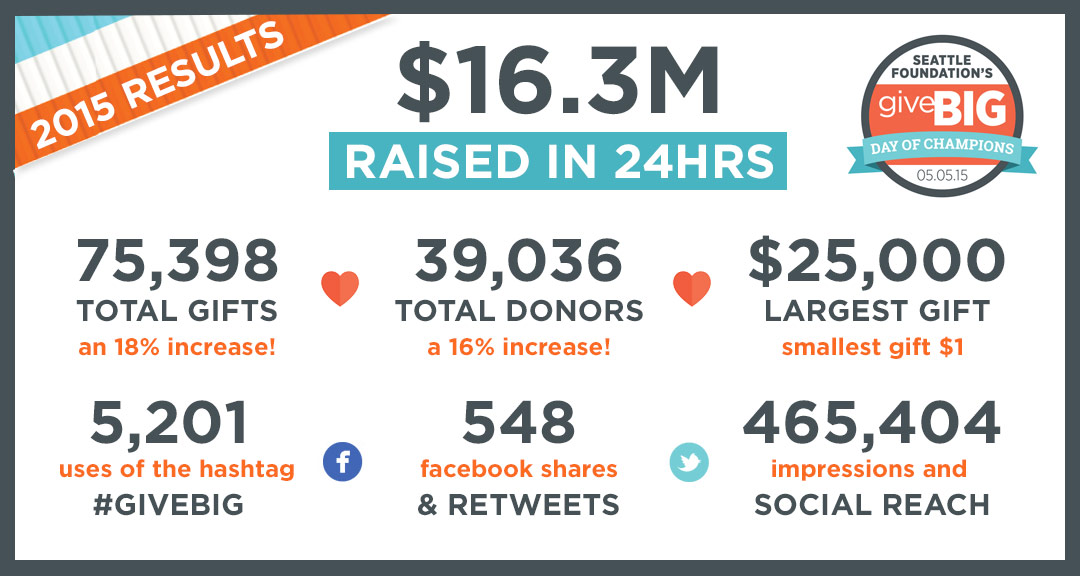 In its second year, the Kitsap Great Give, hosted by the Kitsap Community Foundation and presenting partner the United Way of Kitsap County, raised more than $1 million from 5,762 donations to more than 200 local nonprofits — nearly double the amount raised last year, the Kitsap Sun's Steven Gardner reports.

Donors who supported nonprofits directly through Give Local America's #GiveLocal15 campaign, which included a handful of organizations in Idaho, Montana, Oregon and Washington this year, raised $120,000 from 1,105 gifts.

On May 7, the Idaho Nonprofit Center's third annual Idaho Gives raised $1.1 million from 8,905 donors. The Idaho Humane Society had the greatest number of donors (442 people giving $22,605), while The Peregrine Fund DBA World Center for Birds of Prey raised the most money ($33,731 from 319 donors).

Next year's Give Local America event is planned for May 3, 2016.