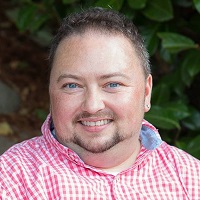 How has the path to high school and college success changed since you were a student?

To me, it feels like there is more public encouragement and expectation for youth and young adults to continue onto post-secondary education after high school. Growing up in the 1970s and '80s in a family where almost no one went on to to college, it was just not talked about. I don’t remember much public encouragement, either.

What are the biggest obstacles to improving graduation rates in your community?

Community as defined at Pride Foundation is not necessarily based on place first, but on identity with the LGBTQ community. The biggest obstacle for LGBTQ students continues to be a lack of acceptance and support in school, home and/or community.

Schools continue to be hostile places for LGBTQ students. [A new national survey administered by the CDC found that gay, lesbian and bisexual teens were at far greater risk for depression, bullying and violence than their straight peers.] According to the National School Climate Survey on America’s Middle and High Schools conducted by GLSEN in 2013, "As a result of feeling unsafe or uncomfortable, 30% of students missed at least one day of school in the past month.” Also, “LGBT students who experience victimization and discrimination at school have worse educational outcomes and poorer psychological well-being. Grade point averages for these students were between nine and 15 percent lower than for others.”

This impacts LGBTQ students of color disproportionately; GLSEN’s 2007 National School Climate Survey found that "LGBT students of color were also commonly harassed in school because of their race or ethnicity — more than half of African American (51%), Latino/a (55%), Asian/Pacific Islander (55%) and multiracial students (59%) reported being verbally harassed in school for this reason.”

Without comprehensive non-discrimination protections in education, teacher and administrative training, and positive policies, programs and curriculum for LGBTQ students, remaining in school — let alone graduating — for some LGBTQ students continues to be an impossible goal.

What are your core strategies for supporting students and improving graduation rates from high school and/or college?

We continue to invest in organizations, projects and programs that work to enhance the lives of and address the needs of LGBTQ youth, adults and families by impacting the local communities in Alaska, Idaho, Montana, Oregon and Washington. By expanding opportunities and advancing full equality for the LGBTQ communities, we are working to reduce growing disparities and inequities in our region. With the goal of promoting structural and institutional change to eliminate long-standing barriers to opportunities, such as addressing bullying and encouraging Gay/Straight Alliances (GSA) in middle and high schools, more LGBTQ students will graduate from high school and go onto post-secondary education.

How are demographics changing and affecting your funding priorities and strategies?

Our demographics are not necessarily changing, but visibility of those who are further marginalized because of their race, economic status, immigration status, HIV status and/or family status as well as sexual orientation and/or gender identity has increased. While Pride Foundation has invested in organizations, leaders, and students from across LGBTQ communities and identities, we have been intentional in centering those who have been historically marginalized, including people of color, transgender people and low-income people, in our scholarship, grants and sponsorship programs.

What’s been a big success for your organization related to supporting high school and college students?

A success for us is our scholars and scholar alums, every year. The passion and drive these students have, especially to overcome some really big barriers, and for some, the rejection from family after coming out as LGBTQ, is just incredible. The breadth of study our scholars engage in is across the board — from medical school to acupuncture training, from art history to welding, from law school to horror fiction writing — our scholars are all over the academic map. Many of our scholars come into post-secondary education ready to take on more leadership in their communities and having our donors and supporters ready to help the next incredible group of leaders is a success.

What are the most important public policy issues for you this year, and what are you doing about them?

Currently, in the larger LGBTQ movement, we are experiencing a backlash on state and local levels from our recent victories for marriage equality. Opponents of equality are trying to take away basic anti-discrimination protections from the LGBTQ community — particularly for transgender youth, adults and families in Washington, by attempting to repeal our 10-year-old public accommodations non-discrimination law. We have invested in public education campaigns and a transgender and ally led efforts to stop a ballot initiative.

In Alaska, opponents of equality are trying to repeal the newly passed non-discrimination ordinance for LGBTQ people in employment, housing and public accommodations in Anchorage — the only city in the state that has protections — so we have invested in outreach to the business community, because equality is good for business. In Idaho and Montana, we have been investing in organizations working on educating the public and encouraging policy makers to pass LGBTQ non-discrimination laws. In Oregon, we have invested in organizations working to make school safer for LGBTQ students and address issues of discrimination for transgender students accessing bathrooms.

What’s one more question we should ask, and how would you answer it?

Q: What's a resource you would recommend to funders interested in learning more about this work?
A: I would recommend connecting with us at the Pride Foundation about the issues and experiences LGBTQ youth, adults, seniors and families face in the Northwest. Additionally, Funders for LGBTQ Issues can help grantmakers and community groups increase and strengthen institutional giving to LGBTQ communities. Seattle will be hosting the 2017 Funding Forward: the Annual Gathering of Grantmakers Committed to LGBTQ Issues from March 29 to March 31, 2017 which provides funders with an opportunity to connect with one another, learn from each other, coordinate efforts and maximize impact.

Gunner Scott is Director of Progams at Pride Foundation, joining us this month for our virtual roundtable with graduation funders and next month at our conference, Under One Sky in Missoula, Montana.