Home » Bringing It All Back Home: Good Work and Collective Action in Montana

Bringing It All Back Home: Good Work and Collective Action in Montana

Last week’s Local Matters gathering in Big Sky, Montana felt like a most fitting way of closing a circle whose circumference I’ve been walking for the last nine years. It was at Big Sky that I first encountered Philanthropy Northwest, when Carol Lewis and David Landers asked me to present the closing keynote to the 2006 annual conference. Not long after that, I was invited to join the Philanthropy Northwest board, an honor I’ve savored ever more deeply as I approach my term-limited departure from the board in September. Nothing could punctuate those nine years in a more satisfying way than to return to Big Sky for the Local Matters: Montana, followed by our annual board retreat.

What made the event so satisfying was the opportunity it provided to feel unabashed pride on two scores simultaneously: pride in Montana and in Philanthropy Northwest. It’s always fun to show off Montana, especially when friends from out-of-state may be experiencing a drive up the Gallatin River valley for the first time. Jeff Clarke gave the assembled Montanans an opportunity to indulge our unabashed chauvinism when he led us into a round of the state song on Wednesday night, climaxed by its modest claim that “Of all the states from coast to coast, you’re easily the best.” Easily.

My pride took on a little more substance as I wandered around the room the next morning, taking stock of who had gathered there. I had never before encountered such a rich blending of philanthropists and nonprofit leaders. That was where my pride in Philanthropy Northwest kicked in. Thanks primarily to Jeff Clarke’s truly visionary leadership, Philanthropy Northwest has been cultivating a much closer working relationship with all of the statewide nonprofit associations in our region over the past 18 months. The board has warmly endorsed this step, but of course it can only move from being an idea to being the reality we experienced at Big Sky when a dedicated and experienced staff makes it happen.

I knew enough of the assembled philanthropic and nonprofit leaders personally, and knew enough about their good work on everything from conservation to affordable housing to be reminded that living well in a well-loved place takes endless commitment, ingenuity and street smarts. The room was full of that and more, and it was clear that many of these people would go home even better prepared to carry on their good work than when they arrived. 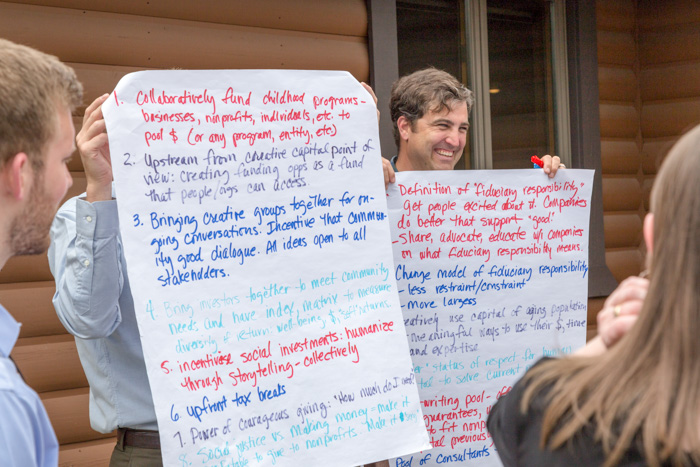 All those pockets of good work were well worth cultivating, but I believe there was something even more valuable working its way to the surface. If I had to characterize the gathering at Big Sky with one phrase, I might suggest something like “stewards of the common good.” Which reminds me of something another native Montanan wrote not long ago:

After serving as the first director of the Montana Committee for the Humanities, Bruce Sievers went on to a distinguished career in philanthropy, and in 2010 he brought that experience incisively to bear in Civil Society, Philanthropy and the Fate of the Commons. Observing that, in our highly individualistic society, “the concept of the common good seems almost anachronistic,” Sievers identified a malady that even the most chauvinistic Montanans would have to admit afflicts our state as much as any other. But he went on to suggest that “the ethos of the common good should … be a major concern of philanthropy that seeks to build the capacity for collective action.”

Sievers seems to me to have it exactly right. The pursuit of the common good is absolutely dependent on the essentially democratic “capacity for collective action.” Whether in Montana or anywhere else, that capacity can be substantially enhanced by building stronger working relationships among philanthropists, nonprofits and all other stewards of the common good. I’m proud to have been part of an organization so boldly committed to that work.

Daniel Kemmis is a board member of Philanthropy Northwest, an associate of the Kettering Foundation, a former Speaker of the Montana House of Representatives and Mayor of Missoula, and author of Community and the Politics of Place. He’s currently working on a new book, Citizens Uniting.

Daniel--this report makes me miss not having been there. I have always admired the tone of radical patience you have brought to discussions of collective action, keeping all our eyes at least half-trained on the long view. I also sense a deep undercurrent of the power of trust as you describe the gathering--how too often our executing on fully baked plans in our separate silos prevents us from fully experiencing the differing but ultimately generative points of view inherent in collective action. Thanks for taking the time to offer this reflection.

You have a special talent in capturing the spirit of a gathering.