Program development accounted for the largest share of support type in 2014. Similar to national giving trends, U.S. foundations and corporate funders allocated the greatest proportion of grant dollars to activities described as program development ($850.6 million out of $1.8 billion), followed by funding for research and evaluation ($494.1 million).

Major grants for these larger categories came from both place-based and national funders, including a $625,000 grant from The JPMorgan Chase Foundation to the Seattle-King County Workforce Development Council for job creation and training support. In contrast, smaller categories may attract more local stakeholders, such as funding from Rasmuson Foundation and The Alaska Mental Health Trust Authority, through The Alaska Community Foundation, for the Recover Alaska initiative’s network-building and collaboration to reduce the harm caused by alcohol abuse. 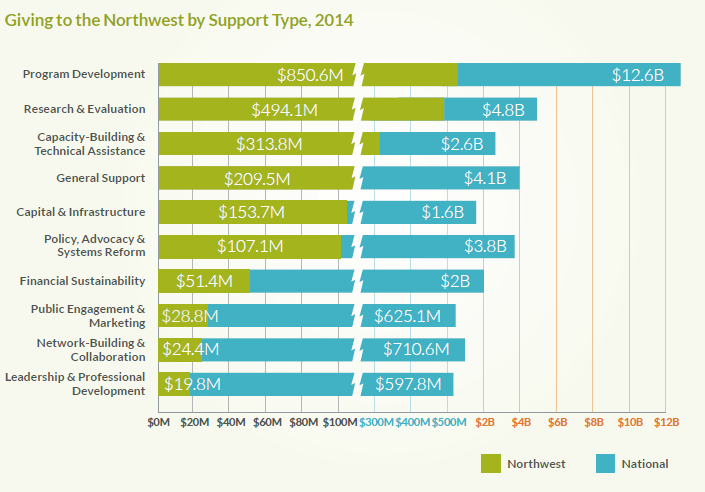 Support triples for capacity-building and technical assistance, and doubles for research and evaluation. Among the 1,387 funders that reported their Northwest grantmaking data for both 2012 and 2014, significant increases were reported for both support types, ranking them third and second for grant dollars to our region in 2014. This reflected an increase in dollar amounts allocated for capacity-building and technical assistance, despite a 22% decrease in the number of grants;18 for research and evaluation, the number of grants remained nearly the same, with the increase in dollars awarded making up the difference.

Program development, the support type that received the most funding in 2014, had a 56% increase. The relatively small increase of funding to policy, advocacy and systems reform, followed by general support, is likely to continue growing as more Northwest funders explore these support types. 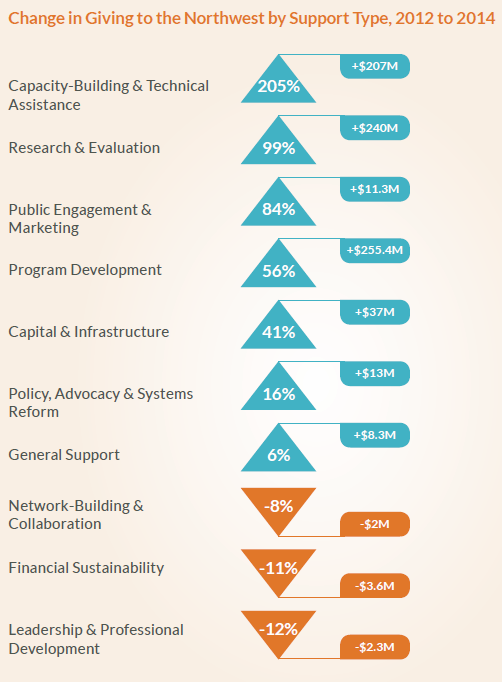