Home » How Philanthropy Can Help Bridge the Partisan Divide

How Philanthropy Can Help Bridge the Partisan Divide

After decades of public service and reaching across the aisle, Sen. Olympia Snowe left Congress in 2012 because the situation had finally become too gridlocked to tolerate.

“I thought I had to fight from a different direction. It wasn’t going to change from within — and I believe in solving problems," she explained at a recent gathering of Philanthropy Northwest members discussing America's partisan divide and the spectrum of actions that foundations and nonprofits could champion to improve our political process.

Since then, the Maine Republican has found a new home as a senior fellow at the Bipartisan Policy Center, a Washington D.C.-based think tank founded in 2007 by former Senate Majority Leaders Howard Baker, Tom Daschle, Bob Dole and George Mitchell. At Snowe's side during the Philanthropy Northwest discussion, BPC's president Jason Grumet described the orgnization as “aggressively bipartisan and committed to bringing politicians together across party lines, either by finding ways to compromise or discovering unexpected shared values."

He added, "Bringing opposites together makes democracy work. Our system is designed to govern a closely divided country. We believe in taking the time to make the messy process work.”

One of BPC's most promising projects is the quarterly Healthy Congress Index, which provides the public with essential metrics for evaluating Congress. These include the number of bills reported by committee, number of working days, number of cloture votes, Senate amendments considered and House floor amendment rules. BPC seems committed to redefining what it means to have “good government” and Snowe and Grumet both pointed to Index results as a sign that Congress may be governing and legislating better.

The center works by “getting people together around the facts," Snowe said. 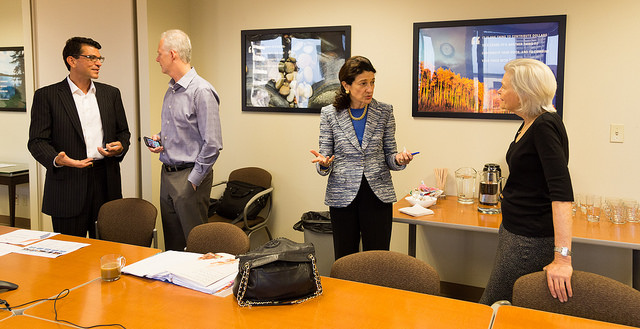 What can we do locally?

During the meeting, Daniel Kemmis, senior advisor to The Giving Practice and a Philanthropy Northwest board member, emphasized the importance of both building home-grown democratic capacity and bringing that capacity to bear on political reform. “Do we need a democracy lobby, one that is as effective as the gun lobby, for example?”

Kemmis has written extensively about the role of philanthropy in civil society. In his monograph Philanthropy and the Renewal of Democracy: Is it Time to Step Up Our Game? Kemmis suggests that "any effort that philanthropists make to help heal our body politic might benefit from a moment of deliberate democratic self-awareness."

Kathleen Pierce, managing trustee of the Kirkpatrick Family Foundation and a Philanthropy Northwest public policy committee member added that there are impediments that may prevent a private foundation from jumping into this work. “It’s not comfortable, it may not appear to pass the legal test, it doesn’t seem doable — we need practical things to show a problem can be solved, and it needs to be translated to local communities," she said. "Where can we focus?”

Kemmis's monograph highlights numerous examples of promising practices in the "evolving relationship between democracy and philanthropy". Grumet, citing the similarities in BPC's mission and Kemmis's work said it’s unfortunately “hard to inspire citizens around political reform or the principles and privilege of democracy if your issue isn’t angry," but optimistically, noted that "community (based) foundations are uniquely positioned to create grassroots, place-based local models for national bipartisanship."

BPC's work is not non-partisan, Grumet cautioned. The best outcome isn't in the middle, per se — "it may be center-right or center-left."

BPC held four town meetings across the country to examine the political divide and have made 65 recommendations on political reform based on their findings. Moving forward, Snowe said they will focus much of their attention on increasing commitment to public service among younger generations; reforming dark money and the lack of transparency for Super PACs; calling for an open amendment process; instituting a 5-day work week for Congress; and filibuster reform.

To find out more about these and other bipartisan efforts related to the economy, energy, finance, health, housing, immigration, national security and governance, visit the Bipartisan Policy Center.