Seattle-based retailer REI made national news this fall by announcing it would remain closed on Black Friday — one of the biggest shopping days of the year — while paying the co-op's 12,000 employees and encouraging its 5.5 million members to spend quality time outdoors instead. The #OptOutside campaign drew more than a million followers on social media, especially in the Northwest, and inspired several other retailers to follow suit. The campaign also confirmed what Philanthropy Northwest has observed this year: REI is taking a more visible and innovative approach in its community engagement and corporate giving.

REI and the REI Foundation have awarded more than $8.5 million in 2015, focused on increasing access to outdoor recreation spaces and participation of youth in nature, including the run-up to the 2016 centennial celebration of the National Park Service. In the Northwest, recent grants include $62,000 to the Washington Wildlife and Recreation Coalition for trails and $33,000 to Islandwood on Bainbridge Island to increase outdoor recreation and work opportunities for veterans and military families. 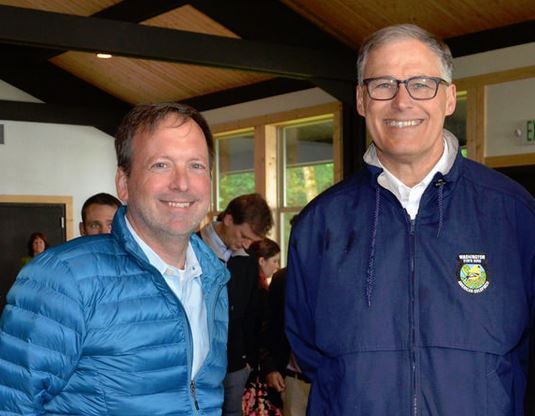 Marc Berejka, REI's director of government and community affairs (left, with Washington Gov. Jay Inslee at the May signing of "No Child Left Outside"), recently spoke with Philanthropy Northwest about corporate philanthropy.

What prompted the #OptOutside campaign, in which REI decided to close all 143 stores on Black Friday while urging employees and customers to enjoy nature instead of shopping?

Part of the co-op’s mission is to inspire people to have fun and spend more time outdoors. We have this core belief that a life outdoors is a life well lived. The idea behind #OptOutside is to put a spotlight on that value. It’s about calling attention to the richness of getting outside with friends and loved ones, especially during the holidays. We’ve been blown away by the response.

REI has always been community-minded, but it seems to be taking a more visible approach to philanthropy lately. What’s prompting this?

Our stewardship work has been underway for decades. We’ve invested nearly $60 million in programs that help people connect to the outdoors since the early days of the co-op. Now we’re a co-op with a nationwide footprint, and we need to help members better understand what the co-op stands for. To cut through the noise, we need to be better at letting our members know that when they shop some of what they spend is going back to support the outdoor community.

This summer’s Every Trail Connects campaign was our first interactive stewardship program. We asked the outdoor community to vote on how we should share $500,000 across 10 inspiring trails. The response was fast here, too, with 100,000 votes cast in a day and a half. It reaffirmed our belief that our members and nonprofit partners can be enthusiastic participants in the conversation.

How many people are involved in REI's corporate giving?

In terms of FTEs, we have a team of three, but we rely on a network of REI employees and leaders to shape and implement our different programs. Region by region, our community outreach specialists help drive local investment decisions. Having that closer insight is key to assuring we have high impact and are locally relevant.

This year, we’ll invest $5.9 million in more than 300 nonprofits that are stewarding more than 1,000 outdoor places across the country. Those investments come out of the co-op’s prior-year profits. There’s also a separate 501(c)(3), The REI Foundation, that invests in NGOs that are working to ensure tomorrow's outdoor enthusiasts reflect the country’s diversity.

What else does REI do to get employees involved in stewardship and community philanthropy?

We focus on projects that support and enhance outdoor experiences. That disciplined focus helps us stay true to the co-op’s mission. It’s also an ethos we look to share across the employee base. At least once a year and sometimes more, virtually all of our teams will partner with an NGO on a stewardship project. At a recent retreat in Bend, Oregon (photo by Sarah Goettsch, REI), 300 of our co-op leaders helped build four miles of mixed-use trails in one afternoon, in partnership with the U.S. Forest Service and Central Oregon Trail Alliance. 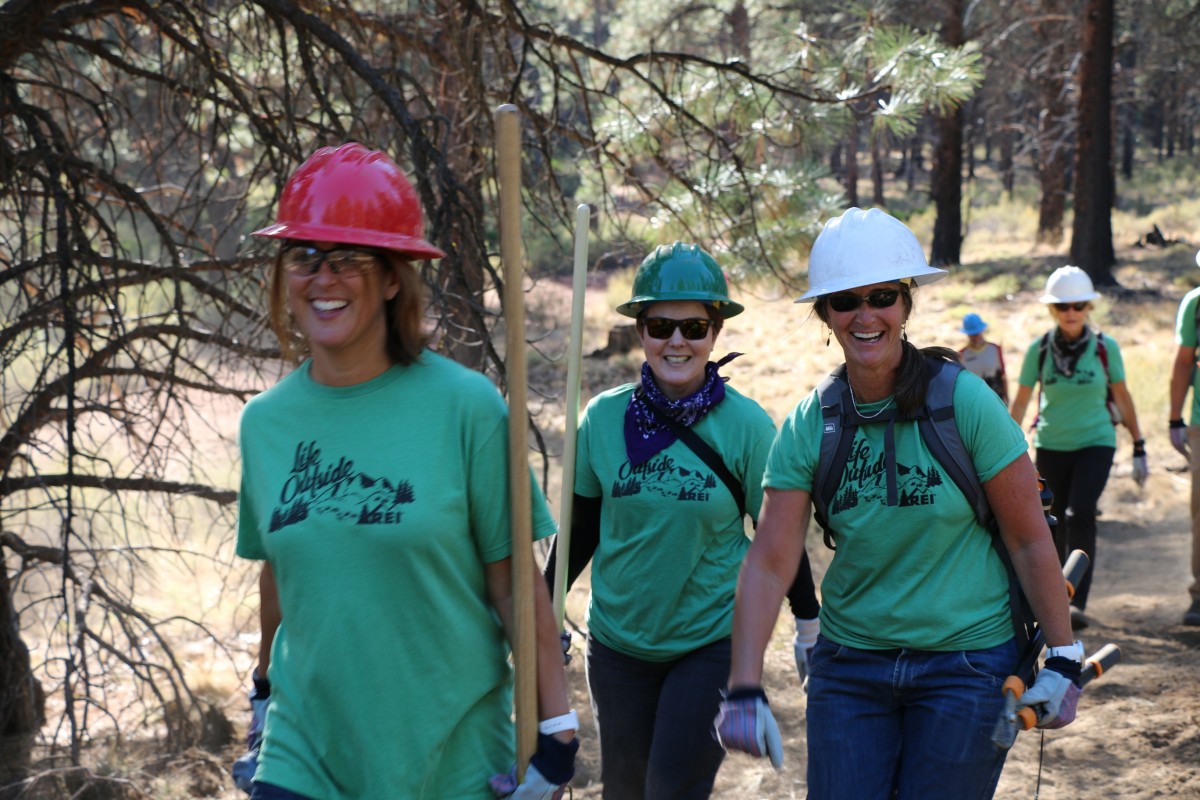 [We don't provide employee matching gifts, but] we also try to make it easy and fun for employees to live the co-op values. Last year, we created “Yay Days.” They give all employees — full time and part time — two paid days off per year to go outside, participate in a stewardship project or do whatever they want. That’s on top of taking off Black Friday this year to #OptOutside. Mine is valid from Sept. 1, 2015 to February 29, 2016. I haven’t decided what I’m going to do with mine yet!

In addition to your U.S. philanthropy, REI contributed to relief efforts after the Nepal earthquake this year. Does this signify the company's interest in global aid, natural disasters, or was it more specifically prompted by the mountains and your members there?

We have a tradition of responding to humanitarian crises where there’s a nexus with outdoor recreation. For instance, after the Oso mudslide in 2014 we made a donation to the Red Cross for shelters, but we also pledged to help Darrington, Washington, highlight their great recreation opportunities after the community had been cut off.  In response to western wildfires, we’ve provided support to local community funds. And we’re helping the National Forest Foundation with tree re-plantings so places where people camp and hike can be rehabilitated faster.

Looking at Nepal, we knew we had to do something because of the iconic experiences and our REI Adventure treks there. We quickly donated $50,000 to Mercy Corps. We’d learned from friends in Nepal that Mercy Corps was best positioned to provide immediate relief. Our CEO, Jerry Stritzke, also sent an email to co-op members highlighting the need and what we were doing. In response, more than 10,000 members made additional contributions of about $850,000 in about two weeks. It was amazing.

Given where we operate, the overwhelming majority of our emergency-response aid is domestic. But as a corporate citizen, we’ll also respond to the largest natural disasters wherever they occur.

With the Sierra Club, we’re supporting research at the University of California, Berkeley, on the restorative power of time spent outdoors. The initial results are pretty promising. Time spent outdoors — adventuring, taking in beauty, hanging out with buddies — can materially reduce PTSD symptoms. Locally, we’re also in the first year of a partnership with Islandwood’s "Boots in the Woods," focusing on healing but also vet reintegration into civilian life more broadly.

Looking to 2016 and beyond, how would you describe the direction of REI's corporate giving?

We’re not just raising member awareness about how we reinvest their co-op dollars; we’re looking to deepen and broaden the impact. Since we don’t have quarter by quarter Wall Street expectations to meet, we can work with the long-term top of mind. To serve members and the outdoors well over the long-term, we’re looking to build more ongoing collaborations with partners so we can achieve more, better together. And with time, we’ll want to bring our members deeper into that equation, too.

Founded in Seattle in 1938, REI is a national outdoor retail co-op dedicated to inspiring, educating and outfitting its members and the community for a lifetime of outdoor adventure and stewardship. For more information on its corporate philanthorpy, read REI's Stewardship Report.