Grantmaking to Alaska held steady between 2012 and 2014, decreasing by less than 1%. Environment and human services were the top priorities of funders to Alaska, accounting for 17% and 15% of total grant dollars, respectively. The state also attracted significant funding from Lower 48 grantmakers, including $200,000 from the Campion Foundation to Trout Unlimited Alaska to protect the Tongass watershed and Bristol Bay watershed from large-scale mining.

Compared to overall giving to the Northwest, Alaska grantees benefited from a larger share of funding for arts and culture in 2014 (13% to Alaska vs. 5% to the Northwest). In contrast, the proportion of grant dollars to the state was lower than to the Northwest for the issue areas of health (14% vs. 38%) and education (7% vs. 19%). Major grants across issue areas, support strategies and population types included a $740,549 award from Rasmuson Foundation to the City of Bethel for its Yukon-Kuskokwim Regional Aquatic Health and Safety Center. 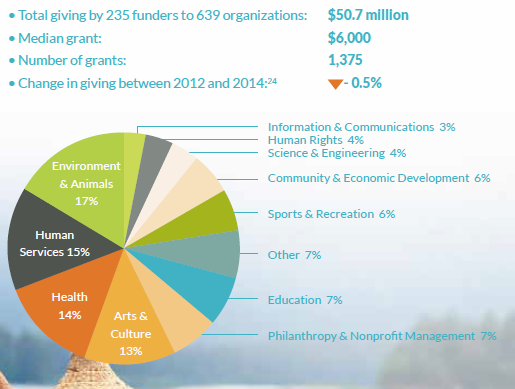 *Based on grants data reported to Foundation Center by January 2017

Top Funders to the Northwest

Trends in Your State